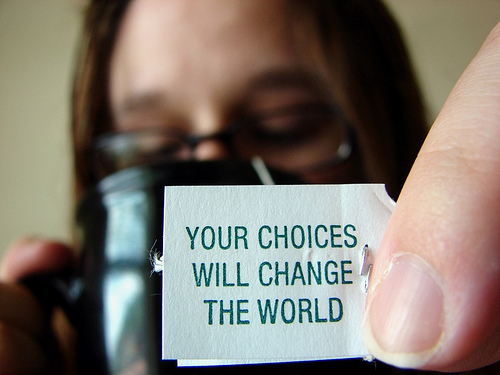 It should be self-evident to all of us that the choices earlier generations made resulted in the quality of life we’re living now.  The past is prologue.
Since the vast impact of the Industrial Revolution these choices have reshaped global societies and the natural world in ways that have created what seem like insurmountable problems now.
Look around – how does life on earth look and feel to you? How satisfying is the quality of life you’re leading?  What about for others?  What’s your vision for the future? And most important – how do you see your role in all of this?
Of course, you care about yourself and those you place into your circle of caring. Your circle of caring is important because it motivates what you do – and don’t do – in the world.  Behavior, after all, is mostly driven by what’s most important to us.
Lately, I’ve been struck by the impact our “personal” choices have on the collective culture.
My husband and I live in a (relatively) tiny house next to one of the most affluent zip codes in the U.S. – Rancho Santa Fe, California.
Rancho Santa Fe, (known by locals as “the Ranch”) is a 6.7 square mile area that’s home to many CEO’s, minor celebrities and the one of the world’s richest men, Bill Gates (of course this is just one residence for the Gates family).  Ranch residents enjoy a median income of $189,000 (median for California is $61,094 compared with the U.S. at $53,046).
Recently the community made headlines not only because it has the highest residential water use in drought-stricken California, but because of the attitudes some of its residents have about it.
In a Washington Post article, gone viral, one resident, indignant over recent water restrictions, claimed, “People should not be forced to live on property with brown lawns, golf on brown courses or apologize for wanting their gardens to be beautiful. We pay significant property taxes based on where we live,” he added in the interview. “And, no, we’re not all equal when it comes to water.”
While it’s easy to get annoyed at this kind of mindset, my overwhelming feeling is one of concern.  Unless you’ve been hiding under a blanket or subscribe to the “I don’t listen to the news,” philosophy, the ever-growing scarcity of natural resources is quickly becoming a fact of life for many of the world’s regions. Factor in an already changing climate and growing imbalances of financial resources and you have a recipe for major social hardships.

Defining the “commons,” a very old idea with little frame of reference in the modern worldview, is simple – some forms of wealth belong to all of us – and these resources must be actively protected and managed for the good of all.
Agreement with that belief requires an active responsibility to protect shared resources – personally and collectively.  Believing in a common good compels different behavioral choices than living in a self-centric world.
The commons are the things that we inherit and create jointly, and that will (hopefully) last for generations to come. The commons consists of gifts of nature such as air, oceans and wildlife as well as shared social creations such as libraries, public spaces, scientific research and creative works. These resources constitute our common wealth.
Definitions of the commons have been shaped by the prevailing beliefs of the economic systems of the times.
Economist Greg Wendt writes, “Our current capitalist model of economics was crystallized in the 18th and 19th centuries where two prevailing worldviews dominated our culture. The scientific temperament with reason guiding all was counterbalanced by the enchanted worldview informed by authentic human experience of art, beauty, consciousness and nature. “
Consequently, says, Wendt, “Our economic mindset is deeply influenced by the philosophical delusion that the economy is separate from society, and society is separate from nature.”
The artificial separation between self and other (including the natural world) is fortified by the belief that ownership and endless growth trump all other achievements.  In this system, business as usual relegates most other concerns (economic fairness, environmental impact, worker well-being) to the category of externalities – that which is outside of the purview of the model.
The argument could be made that our current economic system depends on the separation of self from others and the natural world.
In today’s prevailing economic model, it is only when a business case can be made that these factors add economic profit are these considered as necessities.

“All institutions mirror the motivations that make them work.”  David Loy

We’re born into systems – family, religious, school, countries. Most of us accept these as inevitable givens, even rights and privileges.   Ideas about identity and freedom get inextricably bound up with our beliefs about choice. Believing in the abundance of choice is central to the Western worldview.  Americans, in particular, are famous for their skies are the limit mindset.
But underlying this often, inscrutable optimism, is a deep conventionality about what freedom is. Freedom for many Americans (and a growing part of the rest of the world) is equated with material progress.   While it’s almost always a bad idea to paint entire cultures with one brush stroke, the American idea about progress is one of the most durable on the planet.
Writing about the American Dream for the Roosevelt Institute, Brittany McMahan points out, “That message is built into our unlikely history — our progress from a provincial territory granted independence through a small revolution to the most powerful nation in the world. The dream is about overcoming obstacles, rising above negative circumstances or restrictions, setting a goal, and stopping at nothing to achieve it. That history is also about expanding our idea of what progress means.”
The Dream, born from the roots of the Enlightenment, codified most notably by its most avid American student, Thomas Jefferson, still motivates its citizenry and global aspirants.  One of the most potent, animating ideas essential to the Western doctrine of human advancement and choice is that of growth.
Now we find ourselves at the juncture between growth and necessity. We face a whole new range of crucial choices that will determine the quality of life for all future generations.  How much the habits of thinking and behavior of the past will govern our present and future choices is a critical question for our times.

Is My Water Your Water?

The atomized lifestyle of most Western cultures is hurting us. We have more access to information about the world than ever before, yet our reference groups for choices are still too narrow.   Studies show that increased rates of narcissism in younger people are not only due to increases in online life, but from fewer social interactions and less peer-peer play and family contact.
Most experts agree that empathy, which is nurtured by satisfying early attachment bonding between infants and their caregivers, is strengthened and habituated through a life long experience of social interactions. Dr. Daniel Siegel (Clinical Professor UCLA School of Medicine) a pioneer in the field of interpersonal neurobiology points out that it is relationships that influence, how we learn, live and behave. “Culture, according to Siegel, drives synaptic connections.”
Social neuroscience is providing us with profound insights into the collective mind. No longer just an abstract concept or ideological theory, findings from social neurobiological studies demonstrate that the notion of a separate self is illusory.
According to Dr. Annemarie Early our very security is based on the sense of others “being there” for us when we need them. When the answer to the (mostly) unconscious universal question “Will you be there for me when I really need you?” is yes, we feel safe and secure.
Early refers this question to Dan Siegel’s term “earned security” meaning that we have the capacity to change our attachment patterns by changing our internal working models and getting into relationships that foster security.  She believes that “We can change our very neurochemistry and bodied sense of self by attending to our attachment patterns. This is a hopeful message- we are able to change throughout the lifespan and that has implications for all forms of human engagement.”

The Flowering of Collective Empathy

Fortunately, we hear the term empathy mentioned more often these days.  While the public still debates the nature and scope of empathy, there’s a new term that’s being seeded in the cultural conversation – collective empathy.
Empathy, usually activated by direct personal experiences or local and major events that get our attention, depends on our sense of emotional proximity to others. It’s important to think about emotional proximity as more intentional, rather than random. Who and what we place into our circle of caring can only result in collective empathy through conscious choice.
While information overload and so-called compassion fatigue play major roles in keeping our circles of caring small and emotional distance wide – changing what Daniel Siegel calls, our working internal models, can shift our relationship to the wider world.  As Siegel says, “As long the self is defined as a singular noun the planet is cooked.”
Collective empathy requires an active presence in and to the world around us.  We’re drawing on a very deep reservoir of internal well-being when we engage in collective empathy. We’re transcending the places inside that scare us, keep us small and close to “home.”  The more we move from me to we thinking – the more we access the strengths of our evolutionary interconnections.
The seeds are planted; the needs are great; it’s up to us to choose that the next revolution is how we relate to the neighbors next door, on the other side of the world – and to the earth itself.